Family road trips growing up were exclusively built around fishing and almost always took us north, over the Straits and to the westernmost parts of the Upper Peninsula.

Along the way we crossed countless rivers, streams and culverts. I pleaded to stop at each one, eager to catch the first fish of the trip even if it was a creek chub pulled from a water-filled ditch. Most of the time I was shot down — it was normal to make the 6-hour trip with just one or two stops for gas and a much-needed bathroom break — but every so often the urge to pull over at the next set of striped signs was even too much for my parents to ignore. 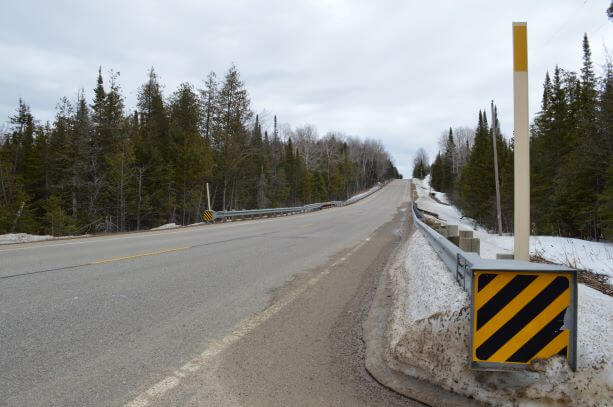 The urge still strikes me today, especially this time of year when the creeks and ditches of Otsego County swell with snowmelt and usher in my favorite season. Spotting those black and yellow stripes in the distance still triggers a part of me to nudge onto the shoulder, shut off the engine and just see what the water’s up to.

Bigger rivers like the Sturgeon, which already flows hard year-round, were fully charged with water this week. I stood on Poquette Road bridge the other day and stared down into the Sturgeon, watching bits of leaves and small pebbles tumble along with the current. This natural surge of water is necessary to flush debris and silt from the riverbed so fish and aquatic bugs can get to the underlying gravel they need to live, feed and reproduce. 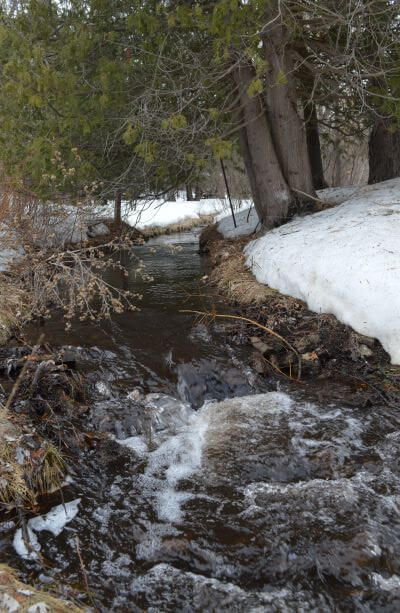 As fast as rivers carry the snowmelt away, it’s not fast enough. Water backs up into wetlands, culverts and ditches, forming vernal pools and streams where new life bursts forth every spring. These places will erupt with the chirping of frogs and toads and the songs of red-wing blackbirds in the weeks to come. By summer, they’ll be dried right up with little sign they were ever a hotbed of animal activity but for now they’re just getting started.

These places are pretty easy to find right now. Locally, head northeast from Gaylord where the Pigeon, Sturgeon and Black rivers begin to form. You’ll find their main branches flow north but the streams and dribbles which feed them can meander in all directions as they find their way through a network of embankments, driveways and culverts that are smaller than they should be.

The best way to find them is to keep your eyes peeled for those telltale black- and yellow-striped signs — engineers call them “object markers” but I call them “bridge signs” because they’re almost always used to mark road/stream crossings. I’m always disappointed when I come up to one only to find I’m on an overpass looking down on a dry roadway or snowmobile trail instead of free-flowing water. Congdon Road and Old 27 near Whitmarsh Road are both offenders in this department.

The Sturgeon River where it flows under Poquette Road. Photo by Chris Engle 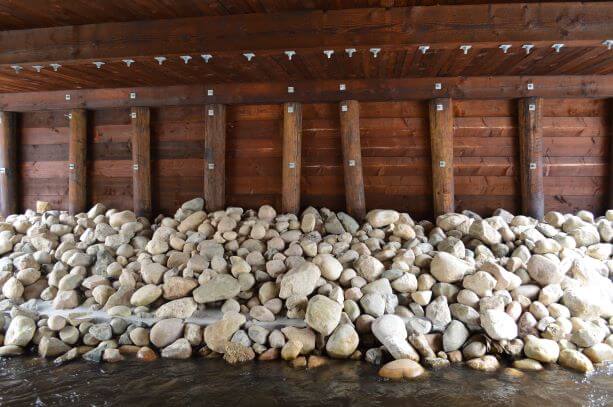 Below Poquette Road, large stones line the abutments of the timber bridge crossing the Sturgeon River. Photo by Chris Engle

But for the most part, those object markers flag a point of interest where you should stop, stretch, and look around you. The bumped-out gravel shoulders at each end of a bridge are a good sign that others have done the same thing and there might even be a trail or public land worth checking out. Further down Whitmarsh Road, just past where it crosses the Sturgeon River, is a nature preserve and trail fitting this description perfectly.

Take a drive today and be sure to stretch your legs every once in a while. You might end up finding something you’ve never seen before.