When I rolled out of bed this morning, I thought the best thing that could happen was to hear my first in-the-wild elk bugle. I never dreamed I’d get close enough to see elk, let alone smell any.

The day started as the eastern horizon began to light up behind the trees. A handful of us here for the AGLOW conference eagerly awaited our encounter with Michigan’s wild elk herd. Brian Mastenbrook, Wildlife Field Operations Manager for Michigan’s DNR, had a blueprint for the morning that included several stops in Pigeon River Country State Forest, where bull elk were expected to be bugling. He warned us that “they’re kinda like turkeys- they’re on, they’re off.”

Just one bugle would be a victory in my book, I thought.

A short drive from Treetops Resort had us in elk territory, rumbling down narrow, winding gravel roads. The first destination was a pipeline easement which provided easy access to the top of a hill. Elk tracks and poop were abundant.

The first few bugles from Brian failed to elicit any replies. About the time it seemed nothing would happen, one bull replied half-heartedly from the south. Then another answered from the east. Everyone’s eyes got a little wider.

Brian thought we could get a little closer to the first, so we hiked back to the trucks and sped to another spot. Again on foot, we followed a logging road through the woods, which led through several forest openings. The last was a sprawling, irregular food plot which had just been re-planted a few days prior. Fresh elk tracks were an encouraging sign. 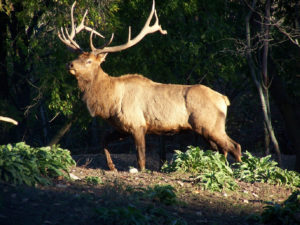 Somebody— I don’t know who because I was still looking at tracks— spied an elk over the field and through some trees. I looked in the direction of emphatically pointed fingers in time to see the form and color of a bull. He was traveling right to left, obliquely in our direction. Brian thought there were actually two. He led us farther up the field to try and get another glimpse.

After some waiting and calling, we turned around and went back the way we came. I couldn’t help but think those bulls would be crossing our path, and approximately the same time as us. I kept a hairy eyeball on the woods ahead.

Sure enough, I spotted at least one through the jumble of trunks as he crossed a small opening. More waiting and calling failed to produce another sighting, but we could smell them on the air. It seemed everyone was feeling pretty upbeat about those short encounters and we headed out for the next spot.

Just as we got back to the truck, some heard a bugle “not far off” through the woods. Not having heard anything at all, I was skeptical. Brian led us a short distance in that direction and called. The answer, both loud and confident, was shockingly close. Brian encouraged us to creep ahead a little while he stayed back and called.

Well, I think that bull was creeping in our direction at the same time, because just after we sat down, he appeared in full view. I got a pretty good look at his antlers, and it seemed to be a 4×4 or small 5×5 set. Dustin Sanchez, here representing Real Avid, ranged him at 133 yards. Honestly, it seemed lots closer, but it’s hard to judge distance when your heart is thumping and your breathing gets real heavy.

Anyway, that bull gave us a show. We watched for 15 or 20 minutes while he paced around back there and thrashed a little tree. Brian did what he could through calling and thrashing to try and get him to close the distance, but he wouldn’t. I wondered if perhaps the bull was reluctant to come to the challenge; Brian thought the bugger might have been a little suspicious.

Either way, it was a far better morning than I had the audacity to expect.

Lower Michigan’s elk herd numbers around 1,100. If you’d like to have your own encounter, get up early, cover some ground, and hope you’ll be lucky. Or bring Brian— that guy knows his elk.