I was snowmobiling with family through Montmorency County about 40 or 50 miles east of Gaylord when the lead sled came to a sudden halt. My uncle shut off his machine and lifted his helmet. I pulled up alongside him and did the same.

He silently aimed his finger at a shadow lurking at the edge of the trail barely 20 yards ahead and whispered excitedly.  “Elk!” he said. “Two of them!”

Sure enough, the shadow moved into view, followed by another. Two cow elk stood broadside to us, pausing just long enough to see if we were a threat. In a few steps they were gone, disappeared into the thick aspen grove like ghosts. 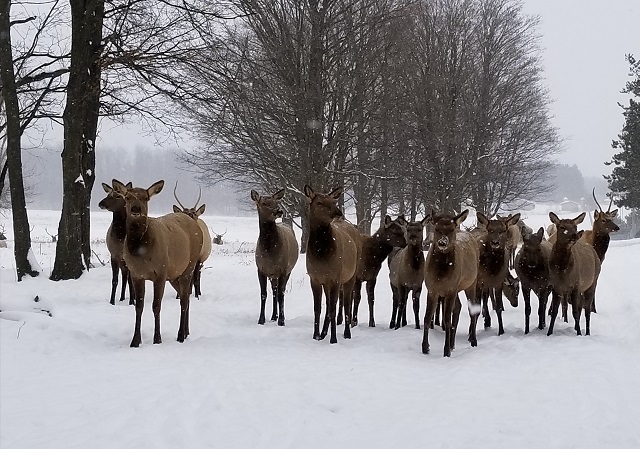 But it was far from over. Twenty more cows and calves trailed behind, trotting across our path without a glance or hesitation. I swear we could feel their heavy hooves punching through the compacted snow of the groomed trail. Without a doubt, these were huge animals.

When the last one vanished into the aspens, we turned to each other and exchanged grins and nervous laughter.

Then one more animal appeared.

Before us was a massive bull, its antlers reaching up like arms of bone. It towered well above the cows and stood in the middle of the trail staring straight at us. We were in a showdown and I, a teenager on a meager Polaris 340, was certainly the underdog against the half-ton, testosterone-fueled beast.

Stay up-to-date on all things Gaylord with our weekly e-blasts.  Subscribe HERE! 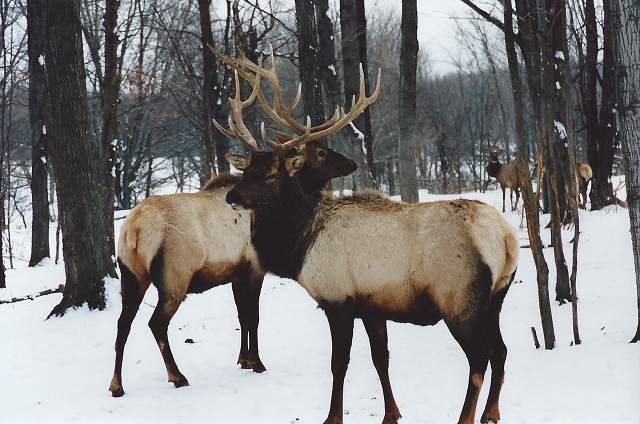 After staring us down for an eternity of 10 or 15 seconds, the bull turned and headed off into the grove behind his harem of cows. Stunned by what just happened, my uncles and I finally started breathing again.

I remember firing up our machines and continuing down the trail as that bull watched us from a hillside.

It would be 15 years before I saw another wild elk, despite frequent hikes and drives through the Pigeon River Country State Forest.

Ready to check out our trails?  Request your free Trail’s Brochure! 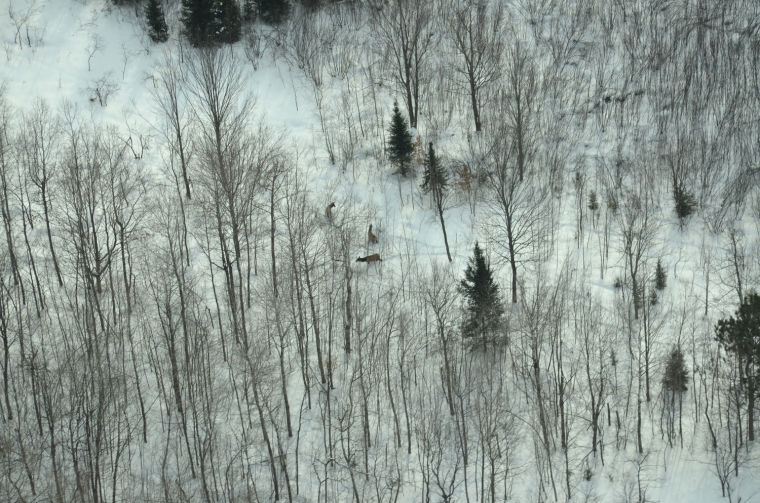 A small elk herd as seen from a DNR spotter plane during my flight with biologists counting the animals in 2014. Photo courtesy Gaylord Herald Times’ archives

By no measure are elk the most elusive of animals. Moving in herds and grazing in agricultural clearings, you can’t miss elk when they’re near.  It’s their scarcity that makes them an uncommon sight – only about 1,000 animals live across an area covering a few hundred square miles of Northern Michigan. Compare that to whitetail deer which number well over a million across the state. That’s what makes seeing them such a treat for most people who encounter them, whether they meant to or not.

To help people in search of elk, the Department of Natural Resources published an online elk viewing guide with waypoints marked across a map of the Pigeon River Country State Forest, 110,000 acres of public wilderness dead center in the core elk range. 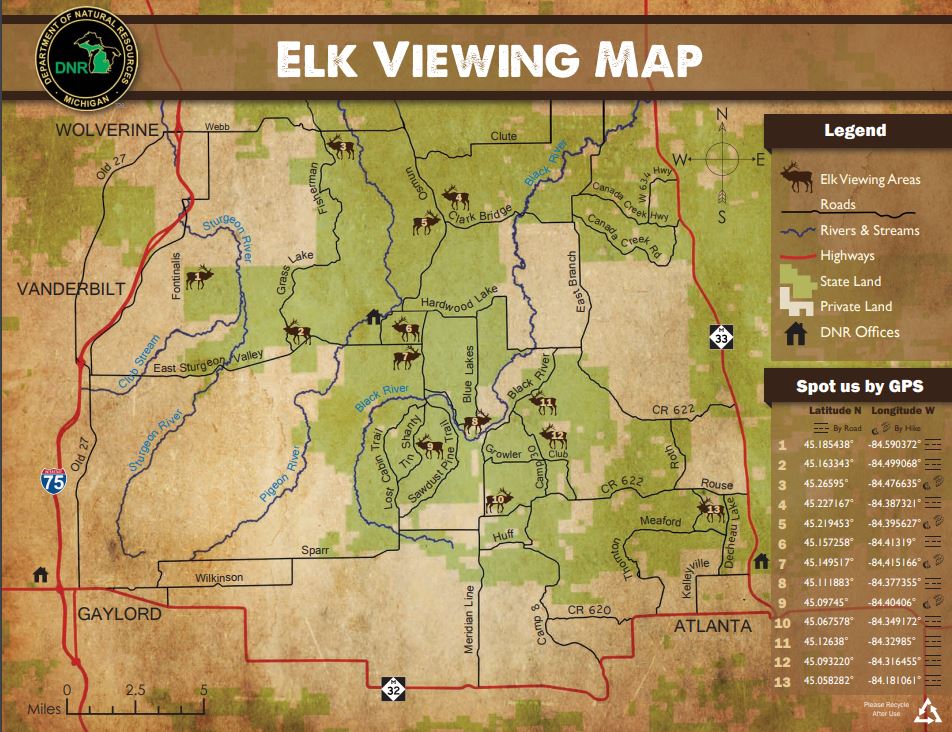 Closest to Gaylord are viewing locations along Sturgeon Valley Road east of Vanderbilt, and Tin Shanty Road northeast of Sparr. There are 13 locations mapped with GPS coordinates, many of which are located near roadways. A number of viewing locations are clustered in an area north of Johannesburg/Vienna by way of Meridian Line Road and others are near the Black River.  Many of the viewing areas are wildlife food plots maintained by the DNR as grazing areas for elk, deer and turkeys, and serve to help keep elk on public land and off private farms where they can damage crops.

The DNR says the months of September and October are best for viewing elk. This is their breeding season, and elk are feeding in open, grassy areas and bulls are bugling. The best times to view these animals are at dawn and dusk.

Elk tourism has a strong foothold in the local economy here and hundreds of visitors come to the forest each year solely to see elk. A logbook in the forest headquarters has dozens of entries by folks from all across Michigan, the Midwest and even British Columbia. 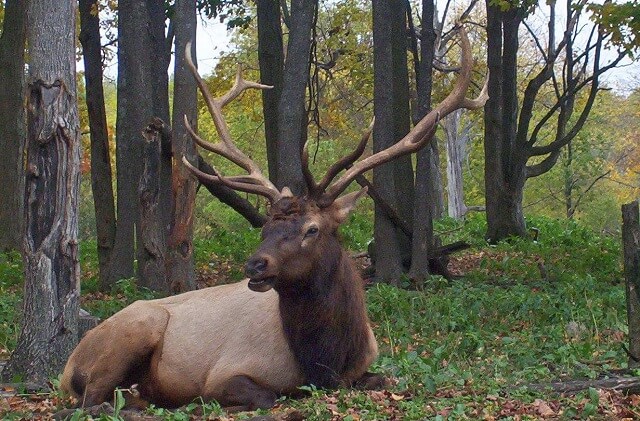 Enjoying the majestic sight of a 900-pound elk doesn’t necessarily require a trip into the rugged Pigeon River Country State Forest. You actually don’t even need to venture out of Gaylord’s city limits.

At the end of Grandview Boulevard, east of Gobbler’s Restaurant, is a viewing area for the city’s own elk herd. A few dozen animals live in the sprawling enclosure and often wander near the fences to feed. If you want a really up-close look at these animals, this is the place.

If an adventure into the wild elk’s range of the Pigeon River Country State Forest is more your style, keep in mind most routes through the forest are gravel and remote, so cell phone reception is hit and miss.  Take a map and compass, as well as basic supplies like food, water, warm clothes and a means of starting a fire. Know your physical limits and those of your vehicle. People can easily get lost or stranded in the Pigeon River Forest – don’t be one of them!

Alright, I’m starting to sound like your dad. Go have fun.

Chris Engle is an avid outdoorsman, outdoor columnist and contributor for the Gaylord Area Convention & Tourism Bureau. He can be reached at englemobile@gmail.com.