The plan was simple: catch one or two brook trout for lunch.

We had the stove, we had the frying pan, the butter, the salt and pepper. We had the appetite. Paige was all excited for her first shore lunch, but the fish apparently were not.

Nestled in the southwest corner of Otsego County is the Deward Area, a 7-mile stretch of wilderness and historical hub of lumber activity in the 19th century. That use continues today, as piles of logs stand among clear-cut areas abutting Manistee River Road, but mostly it’s a playground for fishermen, hunters, and the occasional canoeist willing to bravely navigate the cold and narrow waters of the upper Manistee River. 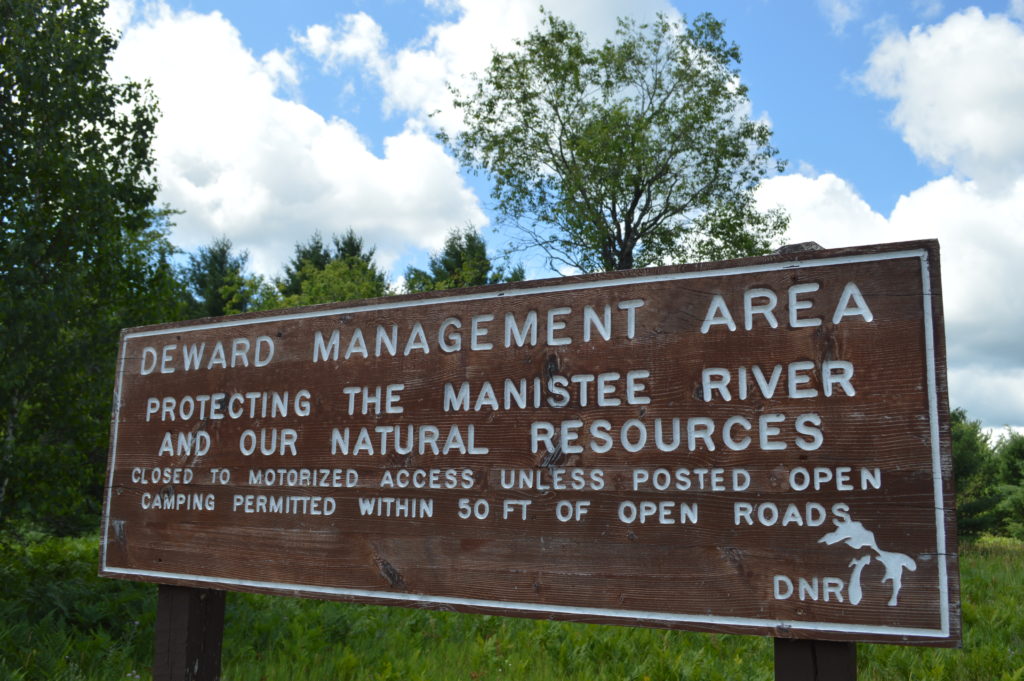 This sign welcomes visitors to the Deward Area, a 7-mile stretch of wilderness between Mancelona Road and Frederic. Photo by Chris Engle

The area is rugged, dusty and dry, making it prime habitat for a major source of food for trout this time of year: grasshoppers. It’s the hoppers that draw me to this stretch every summer, because fishing the hopper hatch takes almost no finesse, which is perfect for me.

Grasshoppers are clumsy critters, flittering up from the tall grass and frantically flapping their little wings before crashing back to earth like crippled airplanes. They bounced off Paige and I in swarms as we kicked through the weeds. They’re everywhere, so some are bound to fall into the river, and that’s what the trout – and I – count on. 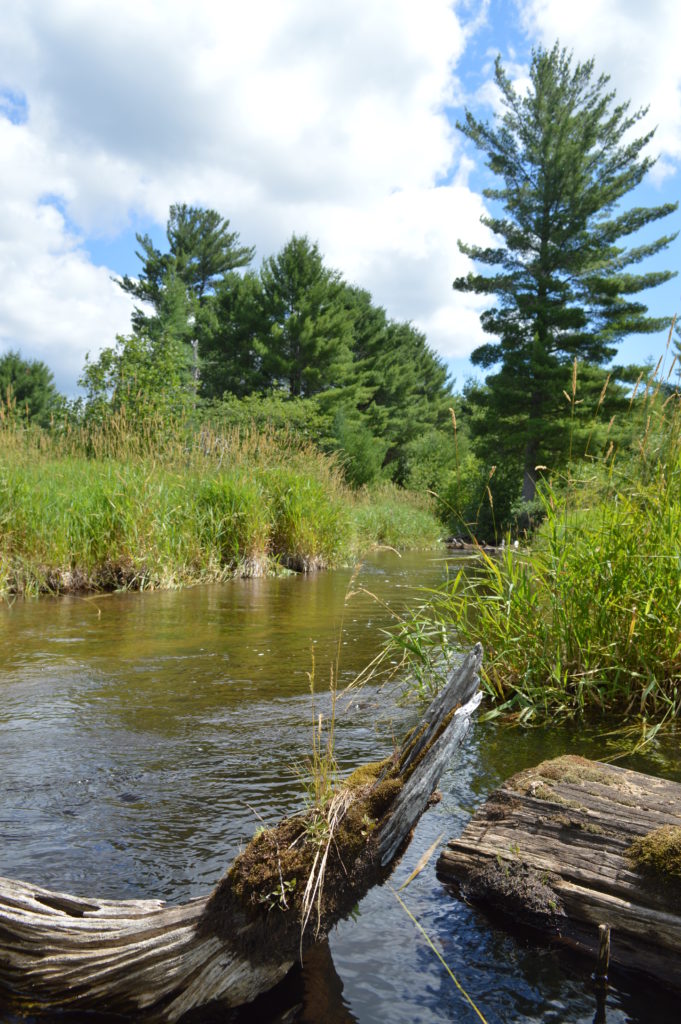 The Upper Manistee River is narrow, cold and grassy but open enough for novice fly anglers to fish without snagging tree branches. Photo by Chris Engle

A grasshopper falling into the river makes a scene. They splash and kick their powerful legs in a vain struggle against the current. In contrast, an aquatic nymph emerging at the surface to “hatch” into an adult fly does so inconspicuously, as to not attract the attention of hungry trout.

It’s this hatch fly fishermen mimic to catch trout. The saying, “match the hatch,” goes with the practice of casting a fly that imitates whatever bug is hatching that time of year and, in some extremes, that specific day or night.

Dry flies are casted gingerly so they don’t break the surface tension of the river and just float there, suspended between the two worlds, waiting for a trout to notice. That takes a lot of practice, but who’s got time for that? 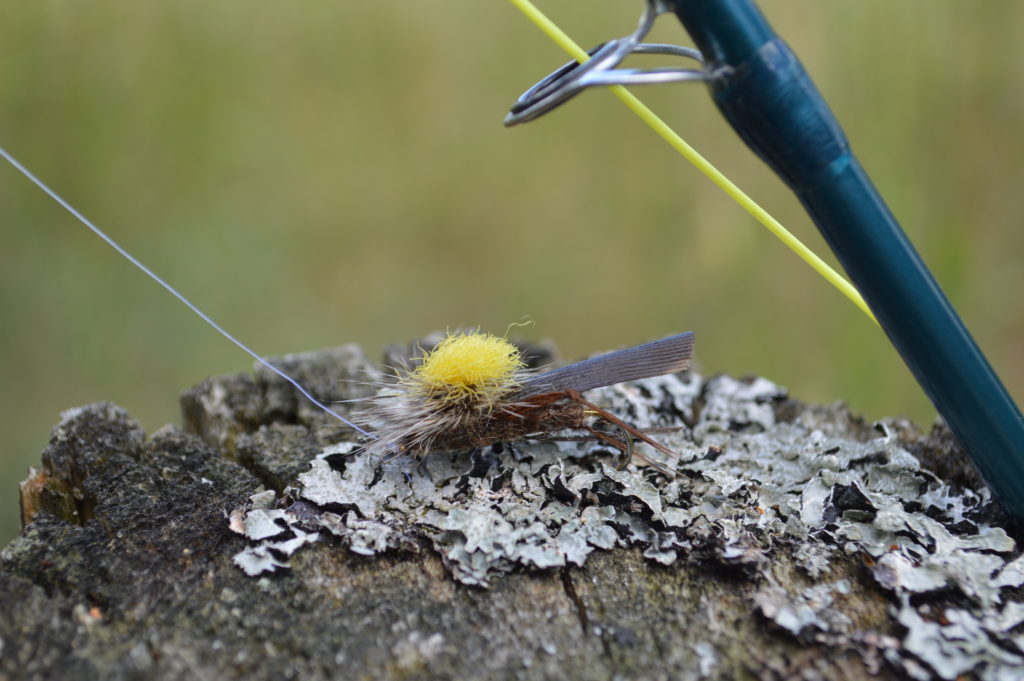 An example of a parachute hopper fly well suited for fishing the upper stretches of the Manistee River where it winds through grassy meadows. Photo by Chris Engle

I like fishing hoppers because casting the artificial flies mimics the clumsiness of the bugs themselves. They’re heavy when they get wet, slap the water with a splash, and the little parachute-like tuft of material on its back still manages to keep it afloat.

I’ve caught my best fly-rod trout this way, and it’s what I was hoping to do this week for an easy lunch for Paige and I, but it just didn’t happen.

In my defense, I didn’t want to get out of earshot of Paige as she played on the riverbank, so this limited my fishable stretch to just a hundred yards. I still had a couple good rises but no trout committed after 30 minutes of casting. Our meal of trout with avocado – a recipe I learned from a favorite YouTube fishing channel – was just not in the cards. 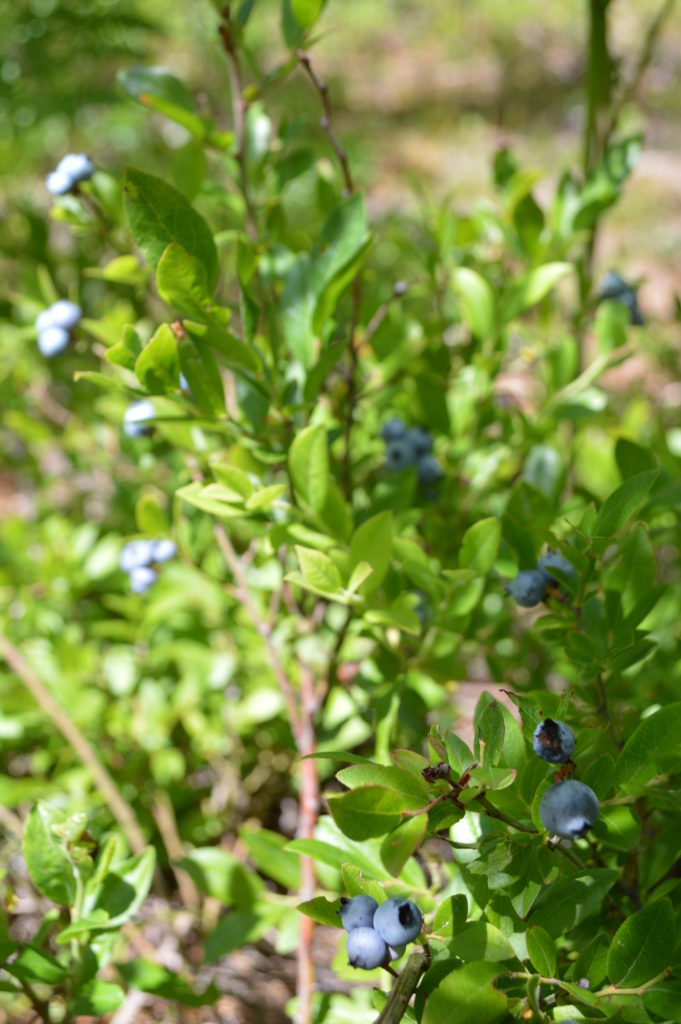 Back on shore, Paige was rummaging through the scrubby blueberry bushes absolutely loaded with fruit. I rinsed out the plastic container we’d reserved for holding live grasshoppers as bait and readily filled it with berries. We bought some cottage bacon from a local farm on the way home and had it with some blueberry pancakes that night. The avocado went back in the fruit basket.

Hopper season rolls on well into August so I’ll be back to try it again. It’s also not limited to the Deward Area – any headwaters flowing through grassy, open areas are great places to fish or learn how to fly fish.

And if you fail, there’s always blueberries!