It was a normal, chilly morning on Otsego Lake Dec. 15 when a fish thumped the rod I’d been jigging.

I was after walleye and this felt exactly like one, as the heavy, pulsing tugs bent my rod in a sharp arc. Fishing in only 4 feet of water at the north end of the lake, the fight would be over soon – and it was. 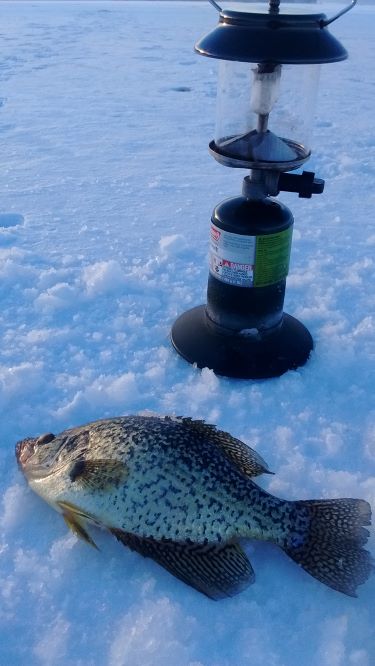 Out of the hole came a massive black crappie. At 14 inches long and as thick as a fat steak, the panfish easily weighed as much as a keeper walleye. I was dumbfounded – what the heck was this fish doing here?

Honestly, I’m just as puzzled by the way walleye seem to congregate in this shallow end of the lake too. Walleye usually prefer structure like rocks, reefs and deep weed edges, but this vast area of 4- and 5-foot depths with low weeds and a muddy bottom is an unlikely but safe bet for local walleye fishermen any given winter.

That’s the thing about Otsego Lake. There are no rocks. There aren’t any real reefs. There are some dropoffs near the points along the eastern shore. But for the most part, the lake is shallow and weedy everywhere, so the fish – and there are lots of fish on Otsego – are just about anywhere.

This fact took me a few years to adjust to after fishing the lake for the first time in 2005. I lived within sight of Otsego Lake for a couple winters and puzzled over the anglers who would set up shanties on its desolate north end day after day.

I finally succumbed to the pressure and, after observing other fishermen’s tactics, started consistently catching a walleye or two on my trips, along with the occasional pike, perch – and one jumbo crappie.

The lake has four public access points along its eastern shore – one across from Northland Marine, one north of the Arbutus area, one at Wah Wah Soo beach and one at the state park, so accessing the whole lake by foot is possible but a lot easier with a snowmobile after the recent snowstorm.

The lake also offers one of only a few sturgeon fisheries in the state, so hooking into a massive prehistoric fish is always a possibility, which is pretty exciting in its own right.

Here are a few things I learned along the way that can be applied to fishing Otsego Lake but also work anywhere else.

Let’s face it – bait is expensive. Walleye minnows are $6 a dozen, so discarding them after a fishing trip is not an option for me.

If it’s going to be a few days or a few weeks before I’m going to use them again, I’ll put my minnows in a freezer bag with a teaspoon or two of sea salt and no water, then stick them in the freezer.

The salt keeps them from freezing solid and seems to help preserve their color and flavor to fish. Though not ideal for stationary lines like tipups, dead bait is better than nothing and do catch fish.

Sturgeon fishermen use dead smelt or herring on their tipups and let the bait lay on the bottom. 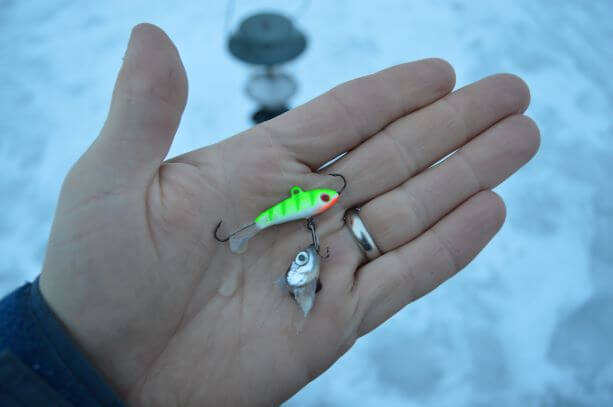 A jigging lure tipped with a minnow head is my preferred walleye bait through the ice. Photo by Chris Engle

While jigging for walleye, a full minnow isn’t necessary. I’ve taken to tipping my lure with just a minnow head or chunk I’ve cut with my pocketknife. Not only does this make bait go further, but it allows the lure to move more naturally in the water. The bait also stays on longer. Salted minnows are great for this. 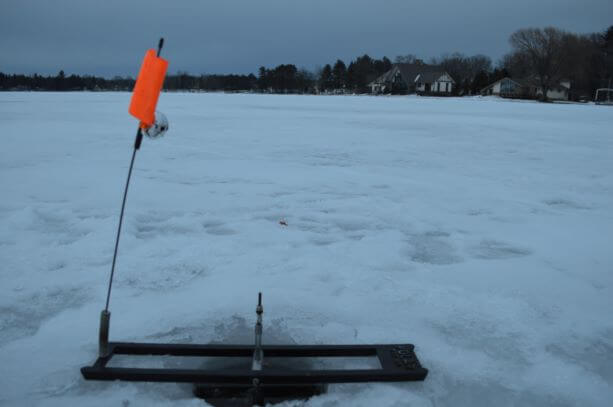 A bell jingling on a tipup flag helps when fishing in the dark. (Dramatic reenactment, not actual bite). Photo by Chris Engle

This time of year, just about every retail store has their Christmas stuff marked way down. Pick yourself up a few sleighbells – I prefer grape size – and attach them to your tipup flags or stationary rod tips. Fishing for walleye on Otsego or trout elsewhere sometimes calls for night fishing, so bells are a great way to listen for that next bite.

Look for signs of other fishermen

When in doubt of where to go, follow the fishermen. Go cut your holes a respectable distance away from other anglers and you’ll learn things like depth, weed cover, structure and species those anglers are targeting. Go talk to them and you’ll learn even more, and maybe even make a friend.

When there aren’t any other fishermen out, look for what they’ve left behind. Old holes with lots of boot tracks around them, spent sunflower seed shells, or fish blood and dead bait on the ice are all signs they spent a long time there and probably caught fish. You can use their old holes if they’re not frozen over but I prefer cutting new, clean ones. 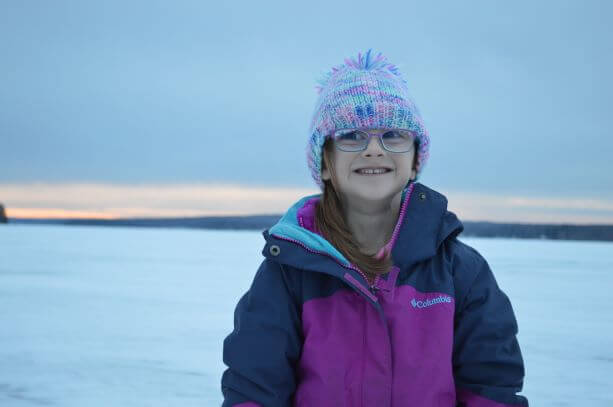 Paige putting on a show while waiting for a sunset walleye bite. Photo by Chris Engle

Take a kid with you

Yes, we all know children make great tax deductions, but they have other perks too. Not only are they good company, but each angler is allowed three lines. More lines in the water means more chances of hooking into a fish, and nothing’s more fun than watching a kid reel in their first catch, no matter whose line it happens to hit on.

On that note, keep in mind that Free Fishing weekend is coming up Feb. 16-17. That weekend, all fishing license fees will be waived, so it’s a great opportunity to take the whole family out on the ice.