I had doubts last week whether Paige would make it all the way to our destination within the Pigeon River Country State Forest without me carrying her at some point. I also wondered if she should be wearing her new shoes for kindergarten, but they were the only ones that laced up tight and four miles of hiking would break them in nicely.

If I’ve learned anything from these last few years as a “house dad” it’s that snacks are an excellent motivator for just about any activity, so the first task that September morning was to stuff every pouch of my backpack with finger-friendly foods. Two half-sandwiches and some string cheese fit in a cooler pouch, zip bags held almonds and peanut-butter crackers, and one pocket held a Hershey bar and Skittles for that extra sugar boost if she needed it. A pack of tissue would serve us well in case of a different kind of emergency.

The town of Vanderbilt is the “Gateway to the Pigeon” but it’s another 13 miles down Sturgeon Valley Road before you’re at the headquarters, a historic log building nestled at the inside edge of the 100,000-acre public forest. 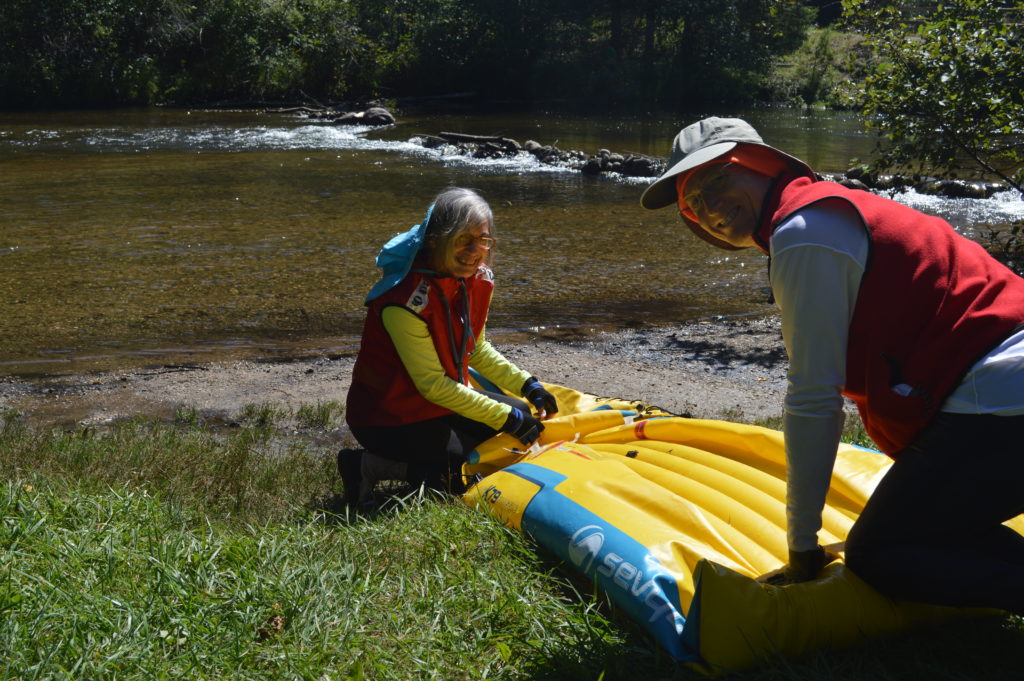 Pam and William Toth, of Florida and Waters, Mich., pack up their inflatable kayak after floating a few miles of the river. “It’s a beautiful trip,” William said. Photo by Chris Engle

A couple miles’ drive later and Paige and I were at the campground on Ford Road, known locally as “the tubes” for the culverts which carry the Pigeon River beneath the road there. It’s a popular spot for tubers and paddlers, and my favorite jumping-off point for hiking the Shingle Mill Pathway to Section Four Lake, one of the most special places in the Pigeon Forest.

Jumping onto the Shingle Mill Pathway near the campground on the river. The pathway offers loops of several distances. Photo by Chris Engle

About two miles separate the campground from Section Four, and even though you can drive up close to the south side of the lake, I prefer the vantage point of the north end. More importantly, the hike in puts me in a good mood, and it’s always fun to see the reaction of somebody making their first approach to this unique pond. For Paige, that day was today.

She started the hike with vigor, running the first few hundred feet of trail along the winding river. I called to her to slow down and ration her energy, not really knowing how she’d do on such a long hike for a little kid. She let me lead and set the pace for the first mile. 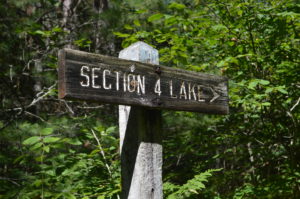 Pointing the way to Section 4 Lake. Photo by Chris Engle

When she tired we stopped and broke out the peanut-butter sandwich crackers and some water. Remarkably, I still had enough service to text a photo of her smiling and snacking on a log to mom, who was back at work and probably wishing she was hiking with us.

Recharged and ready, Paige again sprinted through the woods, dodging roots and fallen branches with her spindly legs. She eventually stalled to collect pine cones and acorns along the way. I took lead and kept our pace again as she followed with handfuls of tree bits.

The forest began to open up as we approached Section Four and I let Paige take the lead so I could see her reaction. She rushed up to a granite boulder overlooking the pond and sat on it, distracted almost entirely from the lake by the big rock. I pointed over the lake and she finally looked its way. 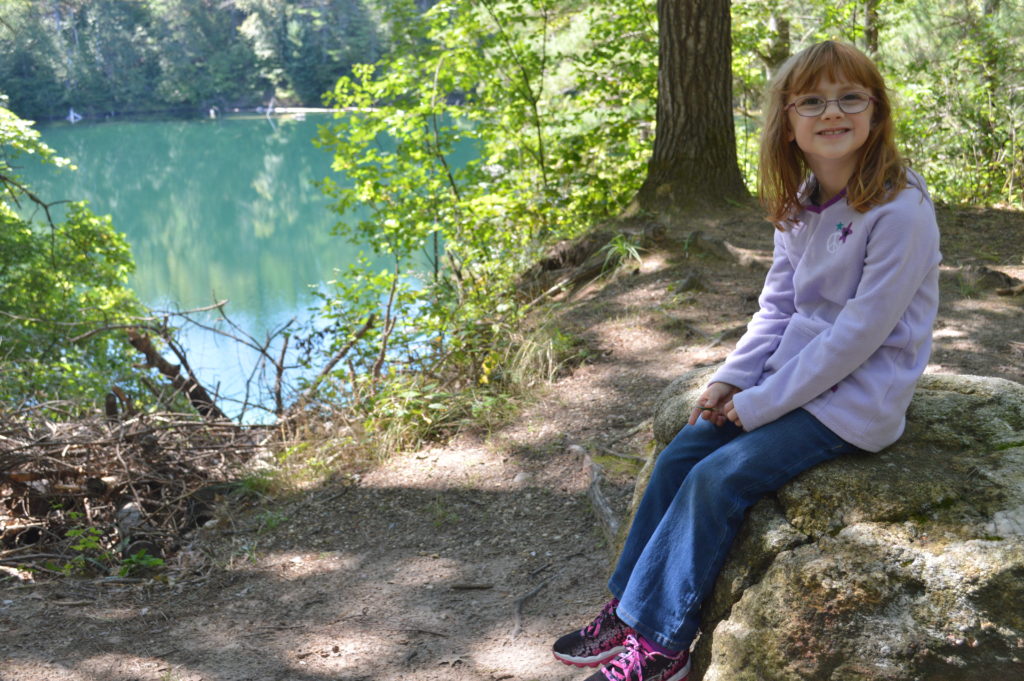 Anyone who sees Section 4 for the first time is awestruck by it’s brilliant emerald hue — Paige Engle’s visit was no exception. Photo by Chris Engle

This is what makes Section Four special. The sinkhole lake, its water laden with dissolved limestone, shines a brilliant greenish blue under the noontime sun. It’s like a piece of the ocean was plucked from the Caribbean and dropped in Northern Michigan except, unlike tropical ocean waters, Section Four is bitterly cold year round – but you’re still welcome to swim if you’re determined or crazy.

It’s this perpetual cold that motivated the state Fisheries Division to use Section Four as a research pond for cold-water fish species. Back in the day, the DNR stocked the pond with brook and rainbow trout to observe their growth rates in a landlocked spring. Eventually it was opened to fishing in the summer months and people can now keep one trout over 15 inches, provided it was caught on a lure or fly – bait is prohibited. 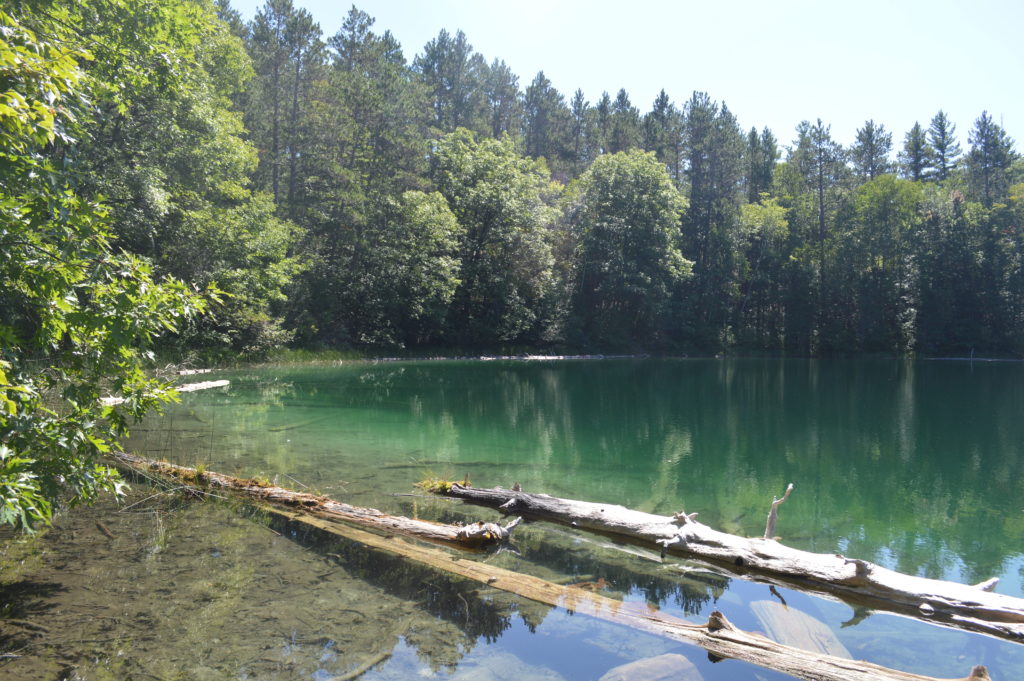 Technically a sinkhole, Section 4 formed when an underground aquifer dissolved limestone and caved the earth in. Photo by Chris Engle

There’s a new trail just to the west of the boulder that cuts along the slope to the lake. Play best friv games on the site friv games online. The most popular collection of jogos friv games are presented on this mega portal. The old trail down to the water led to serious erosion problems and is now partly stabilized with fallen timber. 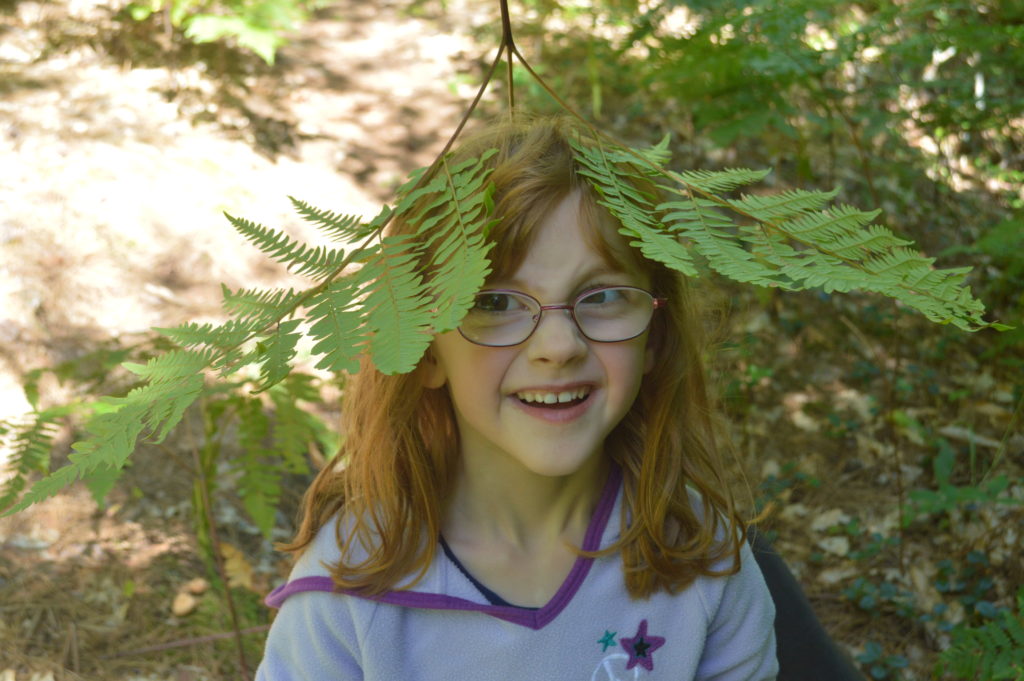 Paige sports a fern hat late into the hike. Photo by Chris Engle

We ate lunch overlooking the pond and capped it off with a chocolate bar and some Skittles. Fed and recharged, Paige hiked the two miles back to the car without ever being carried once. Her first real hike was in the books.

Chris Engle is an outdoorsman, freelance writer and stay-at-home dad in Hayes Township, Otsego County. He can be reached at englemobile@gmail.com.